Today Julia, Jack and I went for an afternoon trip down to Sommarøya (the Summer island).  We stopped on our way at a small cafe just on the shore of Kræmarvika.  This cafe is only open on Sundays.  We absorbed the views and the sounds of children playing, and were impressed as someone carried their large catch (possibly cod) to show the kids as we enjoyed coffee, rhubarb tea and ostekake (cheese cake).  Families were gathering here for snacks following the morning outside.    Most were in active clothes and some had biked from Tromsø. After exploring this very cute cafe, we continued on route 862 to Sommarøya. 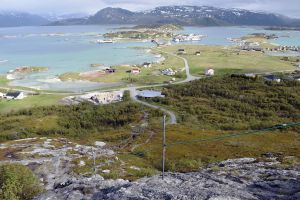 his trail is very rocky and can be very slippery when wet (it sprinkled on us on the way up), but the anchored rope line was nice to hang on to.  There is a observation station and even a tunnel/elevator for authorized vehicles to go to the top of this hill.  There are no roads, but the elevator enables the movement of equipment and supplies.

There was also a large cairn at the top with a registry book.  There had been 20+ groups that hiked this hill earlier in the day.  Our entry “Julia, Nicole and Jack – Missing Jesse.  Rain, rain go away. Come again another day.” was not well received by the mountain, as it poured on us when we neared the bottom of the trail.

There are 2 ways to the top of Hillesøya.  We took the short steep route up, and the longer route down. This was a short, about 2 mile long, loop.  On the way up we saw a beautiful rainbow and expanding views of Sommarøya.  From the top of the hill you could see the vast Atlantic 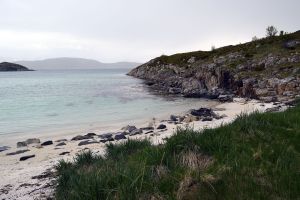 Ocean and the coming rain clouds.  On the way down the ridge the views of Senja, to the South, were impressive, as were the clear Carribean blue waters and white sand beaches.  We stopped at one of these beaches.  Jack was running

around in the sand like crazy, and even into the water… he didn’t like the taste of it too much though 🙂  Julia and I were looking for some pretty seashells when it started pouring.  We quickly made our way back to the car just in time for it to stop.  Since the rain stopped, we found another white sand beach on Sommarøya and 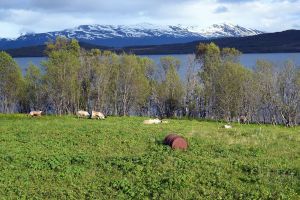 collected a few more colorful snail shells to add to our collections.  Back in Kvalyøsletta we saw close to 20 reindeer nibbling on grass by the ocean shore.  Another day, another adventure… Norway is very special place.

Here are a few more pictures of today. 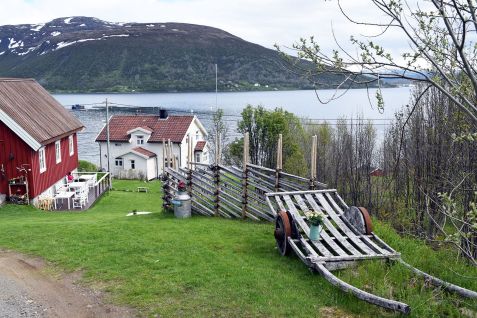 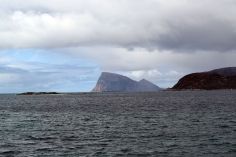 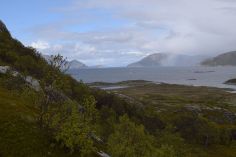 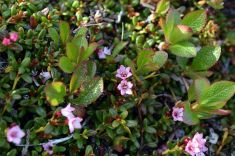 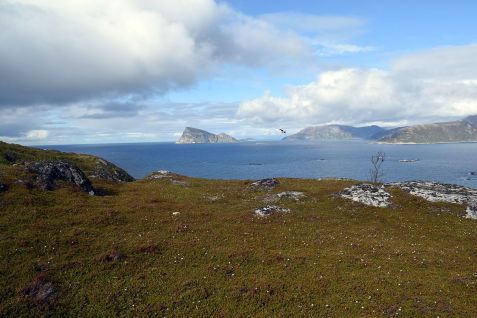 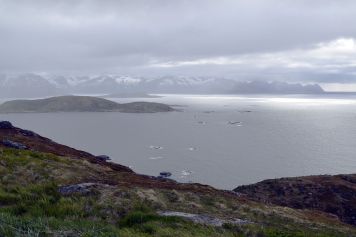 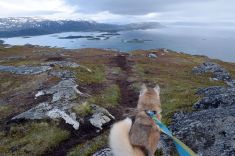 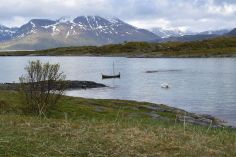 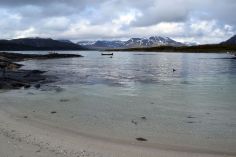