Buren is a peak along the North side of Ersfjordbotn.  The mountains surrounding this fjord create and impressive and dramatic landscape.  These peaks are steep and rugged.  There are 2 mountains in this area that we hoped to hike and thought maybe we could link the two on the same hike today.  It all looked quite reasonable on a topo map and the google satellite maps were not of good enough resolution to mean much to us.  To be fair it would have been quite possible, but would have required a lot more time and effort than we planned for the day.  We’ll have to make another trip to this area… which is certainly not a bad thing 🙂 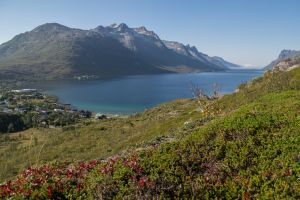 The hike today started from the same trailhead that I had been to a few times, just above Ersfjordbotn (69.696663, 18.632659).  Rather than heading to the South past the soccer field to Nattmålsfjellet, we started North through a very wet mashy area.  Just past the marsh the trail runs straight to a steep rock face, where the trail cuts back up through the rock.  This section was pretty narrow and nearly too steep for Jack to do on his own.  From here, near the top of Ramnberget, the trail was very flat and again quite marshy, but there were beautiful views looking down through Ersfjorden. 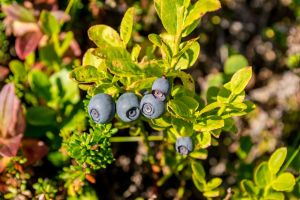 We noticed that the morning fog had receded from nearly everywhere, except for towards the end of the fjord.  We walked to the East side of Skålhammaren where the trail climbed a steep muddy slope.  Hiking this summer has been difficult in such a rainy climate, many hikers had trekking poles with them so they wouldn’t slide down the slope.  I found some beautiful blueberries on this part of the hike, but they were not very sweet, probably because they don’t get enough sunshine to sweeten.

The top of Skålhammaren was a small flat area from where we followed a shallower slope to the North again, this hike was nice in that there were several stages of steeper sections followed by nice flat areas boasting beautiful views.  The last section was very steep, but it was dry instead of muddy but nearly as slippery.  We reached a notch in the mountain side where we could see the first views of the mountains behind Buren.  This is not the route we would have taken, but it was incredibly steep drop down to the small lake of Blåmannsvikvatnet.  It was only a little further to the top of Buren.

As what seems to becoming more usual for us, the views were expansive and incredibly stunning.  We could see the mountains on either side of Ersfjorden, Kaldfjorden and Tromsø.  As we sat at the top in the sunshine, we saw the small hill of Nattmålsfjellet covered in a little puff of fog.  The fog was blowing quickly and we chatted about how cool it would be to be there glimpsing through the fog.  But as we relaxed at the top, now having given up on our extended journey, we saw more and more fog encroaching from all directions.  We were in an ocean of fog by the time we descended back down the mountain.

Once we hit the fog line, we could feel the cool moist air around us.  We met a family on their way up the mountain with a tent to say on one of these flat areas on the mountain.  I imagine they had a beautiful evening sleeping in the clouds. 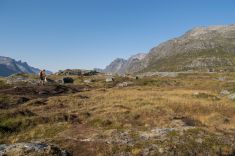 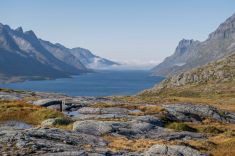 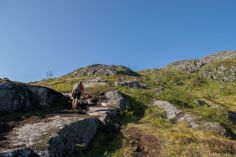 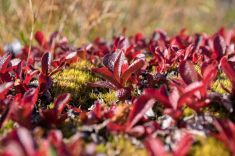 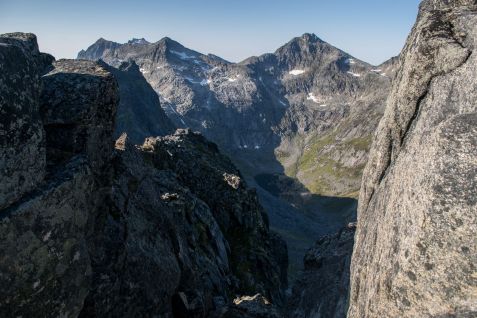 Notch near the top of Buren 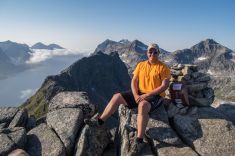 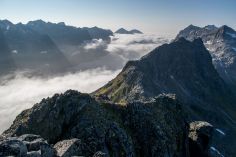 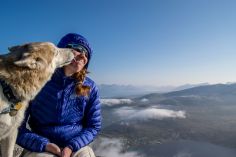 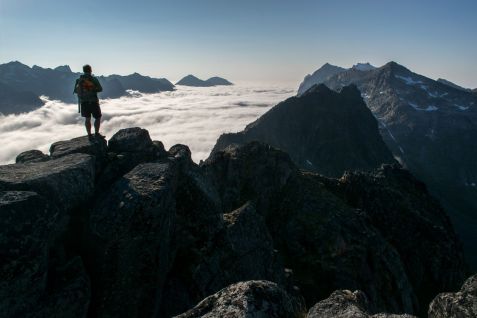 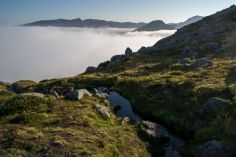 One thought on “Another Foggy Hike on Buren”