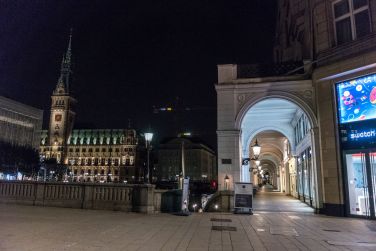 We arrived in Hamburg after 9PM and were both too exhausted to explore much.  So we only walked a short loop to see Rathaus the town hall.  It’s a massive, ornate building with a large square in front of it, the Rathaus market.  There were very few people out, but I imagine there are incredible Christmas markets and frequent events and markets.  We crossed the Kleine Alster and went to see the large fountain, Alsterfontäne.  By the shore there were many young couples and groups of friends hanging out on the stairs, enjoying a drink, a smoke, and the night atmosphere.

The next morning we woke pretty early to get a good start on the day.  From our floor in the hotel, we could see a unique bridge on the Billhorner Brückenstraße, a major route into Hamburg.  The bridge almost looked like a DNA molecule, it’s the microbiologist in me!  We also could see countless cranes for loading and unloading ships in port, and to the the other side the high rises of the bustling city.

The hotel was kind enough to store a large pack with our tent and sleeping bags, as well as our camping chairs, since we wouldn’t be camping on this part of our trip.  We just got a bag check ticket… and put it somewhere very safe.

We stayed on the highway (24) the whole way to Potsdam.  This part of Northern Germany was very flat, with farm land and large wind farms.  We saw many signs for historic places, castles and churches.  I wish we could have had more time to explore, but there is always more to see.  We were glad that we made a stop in Potsdam though.  We parked near the Schloss Sanssouci.  This area was really popular.

We walked up to an old windmill that reminded us of those we saw in Holland.  Historische Mühle von Sanssouci, is now a museum that you can explore.  Not far from the windmill was the entrance to the grounds of the Schloss Sanssouci.   The palace was original built as a summer palace in the 1740s by the Prussian King Frederick II and was later expanded under Frederick William IV.  One of the main features of the palace is a large courtyard surrounded by an arc of columns.  Under the sheltered arc are a number of park benches, which are a great place to sit and admire the architecture.  From the courtyard you can also look across the road to Roßbrunnen, a beautiful fountain with Ruinenberg in the background.

On the backside of the palace are the vineyards, striking terraces covered with lattice and grape vines.  You could walk along the terraces or down any of the grand staircases.  This vineyard was envisioned by Frederick the Great.  At the base of the terraces is the Great Fountain, which was built in 1748.

We walked out further into the gardens to the Chinesisches Haus.  The Chinese Tea House pavilion’s golden adornments glitter in the daylight.  There are detailed columns and numerous statues of Asian figures eating food, playing music and interacting.  The Tea House itself is is a teal color that contrasts with the golden embellishments.  It is a truly regal building.  The interior would probably be just a striking, but there was a function today, so we enjoyed the sunshine on a park bench for a bit. 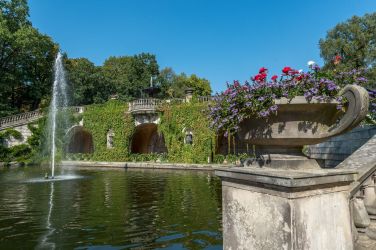 Further into the park, we walked through an old forest.  For being so close to Berlin and in the midst of all these castles and buildings, we were immersed in nature.  Just before we cross the road (Maulbeerallee) we found an open area with a large statue of an archer and another beautiful fountain.  This fountain had grand staircases arching around it.

Across the road we found ourselves at the Orangerie schloss (Orangerie Palace).  We climbed the stairs to the courtyard of the palace with… you guessed it… another fountain.  The Orangerie schloss was tall, much taller than the Schloss Sanssouci.  There were lofty arches both along the building and leading out to another grand park with Belvedere auf dem Klausberg in the distance.

We walked around the back of the Orangerie schloss into the nearby town.  Seeing some of the old architecture and large arches of a nearby church (Bornstedter Friedhof) and another former royal estate, Krongut Bornstedt.

Finally we looped back to the parking area.  I wish would could have spent more time in Potsdam, there were other places and miles of grounds to walk and explore.  These palaces and their grounds have been called the Prussian versailles.  It was a bit like a fairytale!  If you are in Berlin exploring these gardens and the palaces make for an exciting day trip. 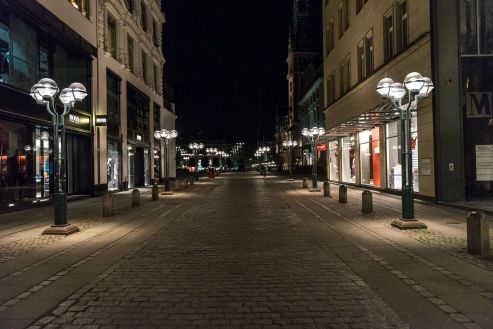 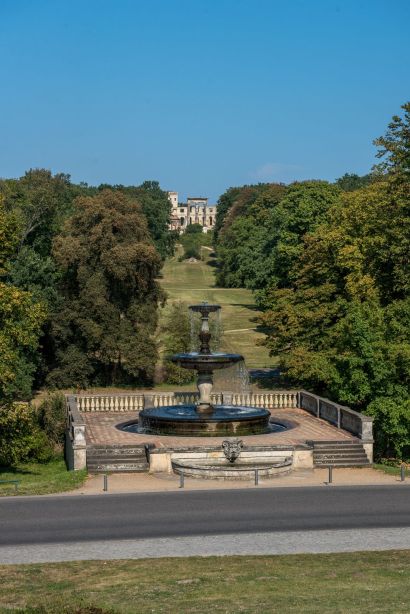 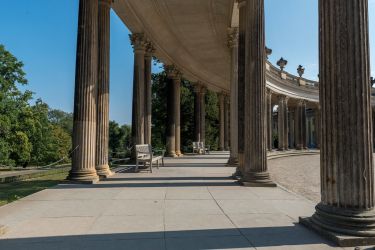 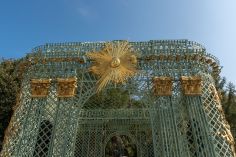 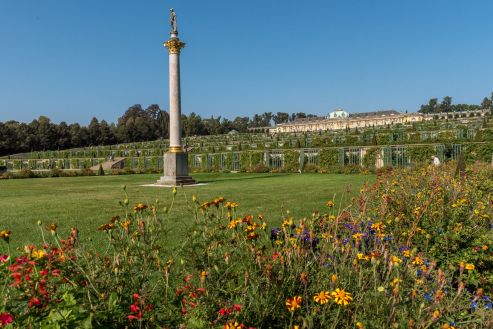 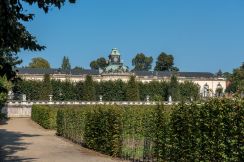 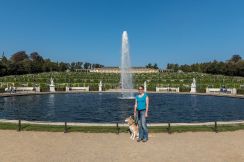 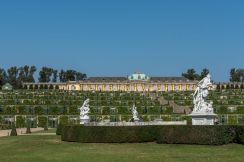 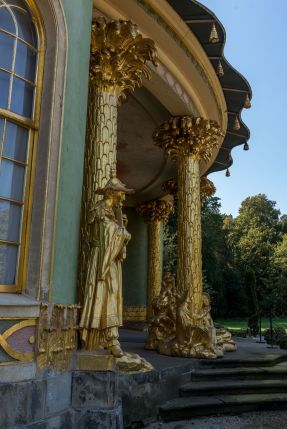 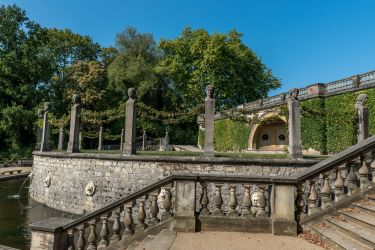 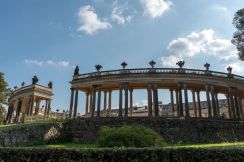