Jesse’s uncle Scott was in Tromsø for another day, and quite interested in going for a longer and scenic hike.   We had lots of options to choose from.  There are so many great hikes in the Tromsø area, and all of them would be considered scenic.  But Jesse had the thought to climb a peak that we’ve been looking at and thinking about hiking for years, the tallest and most distinguishable peak on Kvaløya, Store Blåmann.  Since I arrived in Tromsø, a number of locals have told me that if I’m really a hiker, the 2 mountains to summit are Tromsdalstinden and Store Blåmann.  But I was also quickly warned that Store Blåmann required some scrambling and and was difficult to navigate.  So we have had it on the to do list for a long time.  The main trail to Store Blåmann is quite short, only 3 km, but the elevation gain is significant, from near sea level to 1044 m (3425 ft).  We could see the summit from the trailhead.  It didn’t look very far away, but so many times I thought that along this hike, and yet we still had a lot of hiking in front of us. 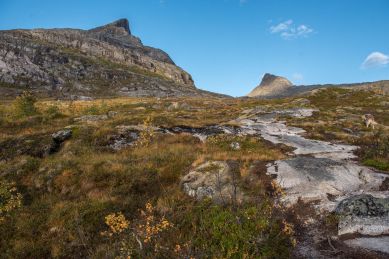 We got a very early start on the trail, so the sun was low in the sky and had a lovely golden color that lit up the autumn foliage.  The trail started from the road, but we had our first scramble just a few steps along the trail.  It was a mellow trail to start out, much of the marshy area had boards spanning between the rocks.  We hiked towards the notch between Store Blåmann and the next mountain to the north, Orvasstinden.  Once we reached a large rock band just below a steep gully going straight to the summit, the trail thankfully turned a sharp left and followed along a wide ramp, which was not exposed, but still at times felt like it could be a wide ledge, that cut along under more steep rock faces.

This section of the trail, was much more lush than expected.  We picked some tart blueberries along the way.  We also stopped to wave to Jesse’s aunt, Mari.  She was homeward bound on an early morning flight.  We’re not convinced she could see us though.  There were a few sections here with larger boulders, but it was easily navigated along the trail.  Nearing the end of this ramp, our surroundings opened up, and we could see more of the mountain once again.  Another trail from the road joined us here.  This trail is also marked on UT.no, but it seems this approach would be much steeper than what we had done so far. 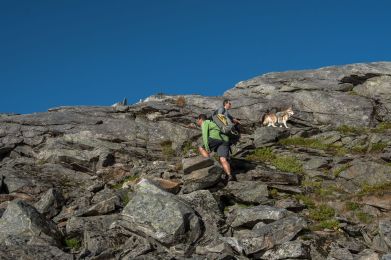 From here, we worked together to find the trail, which is overall well marked, but there often seems to be trails going in other directions, so it’s easy to be misled.  This area had a lot of rock bands that we hiked back and forth along, slowly zig zagging our way upwards.  Most of the trail here was quite good, but for some sections of it we were scrambling onto the next rock band, or walking across solid, smooth rock.  Thankfully the trail was not wet today, we could always find dry footing.  But I would not feel comfortable at all on a wet rainy day, not to mention frost or a bit of ice in late fall or spring.

Along the hike we had really wonderful views of the blue waters from Kaldfjorden below us and we watched the ferry to Vengsøya make its early morning rounds.  Further along the route, we hit a section that became quite steep.  There was a small V-shaped channel in the rock that we could scramble up, but if you look the trail actually goes just past this and up another side of it, which was much easier.  From this point there was a trail heading up the steep rock face above us with 2 main approaches, and a easy horizontal trail heading to the left.  We checked out the easy trail first.

We found that it lead to a great viewpoint of Buren and Rødtinden across the valley from us (towards Ersfjord).  The viewpoint was above a very steep almost cliff-like section of the mountain.  It was quite exposed.  There was a trail from this viewpoint leading upwards, but due to the exposure and that we could not see very far along that route, we decided to head back to the main trail.

On our way up this section we stayed to the left. This lead to some large rocks, where we crossed another notch in the rock to the left side, and then scrambled up through some tight areas.  This section felt exposed to me.  Scott and Jesse handled it just fine, but Jack had some help and guidance, as did I.  Jesse was near the top and held my backpack for me, while I stayed more within the rocks than the others had.  I am not a fan of climbing over large rocks on steep sections, so staying tight to the rocks worked better for me.  On the way down though we tried the other main option (climbers’ right, descenders’ left), which was less exposed, but on our descent seemed to have very little hand and foot holds.  On the descent we stayed close to the larger rocks and avoided much of the open rock as possible.  This was definitely the worst section for me on the descent. 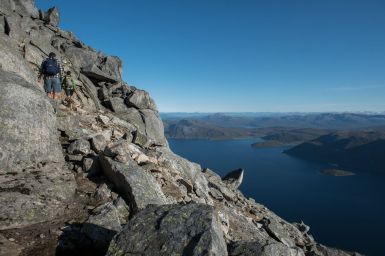 From the top of this steep section, there were again a number of options for trails.  I would strongly recommend to keep an eye out for the remnants of red blazes on rocks along the way.  On our way up we missed a painted arrow that would have helped us avoid a steep, somewhat slippery section.  There were 2 more sections that I did not like on the way up, but on our descent we managed to miss both of them.  So if you are really feeling stuck and have the time, it could be worth backtracking just a bit and see if a different cairn or fork would take you a better route.

We were very close to the top when we hit our last big obstacle.  It was a small and very short notch of rock with a large cairn sitting on the rock above it.  It seemed to be the only logical way up.  So we all took great care and time to scramble up it.  Scott scrambled right up it, while Jesse coached me step by step.  We tried to help Jack up as well, but it didn’t seem safe for everyone.  So this is where we left Jack for a bit.  I tucked him away just near the right side of this obstacle, in a small nook with in the rocks.  I put him there because it seemed sheltered and out of the way…. but on our descent we found out that the easiest way was up was through this nook right past Jack, walking on a random-looking pile of rocks and stepping up onto the rock above.  From below, it didn’t look like the trail at all.  The rock above the footing was good and stable, but it was a bit exposed — still much easier than the scrambling (especially on the way down).

Finally,  the top!!  The last push was rough, but then the mountain really rolled over, it was quite flat at the top considering all that we had climbed and the large cliff below us on the north face.  There were large boulders at the top, so we had to watch our footing. It took us just over 3.5 hours to reach the top.  There is a large cairn at the summit, and this morning it was icy and frosted on the north side.  I found out the hard way that some of the rocks were icy.  Falling on my knees to save the camera — thankfully I wasn’t near the edge.

I made sure to walk only on the sunny side of the rock after that.   We could see all of Kaldfjord from the top, Vengsøya, Tromsø, Ersfjord, Styrmannstinden, and all the rocky peaks to the west along the Ersfjord Traverse to Skamtinden.  It was supposed to be a clear day, but some small whisps of cloud would build between us and Buren, blow away and then build again. We didn’t spend long at the summit since Jack was alone.  But Jesse and Scott found a way to leave our names on the mountain.  There is a container for a log book, but all they found was a few scraps of paper that were covered in names.  So a chocolate bar wrapper, that the pen luckily could write on, was added to the box to continue the register.  It’s best to leave the troubleshooting to the engineers.  😉 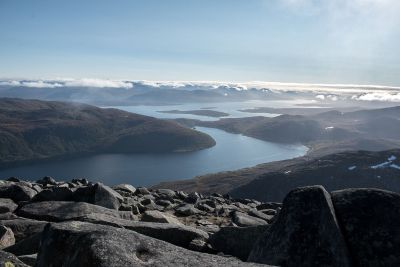 We hiked back down to Jack, this time Jesse and I skirted around the rock scramble.  We didn’t go very far before finding a nice spot to sit, enjoy the sun and have some yummy snacks.  Smoked salmon, cream cheese and Wasa crackers, tangerines and of course some chocolate for dessert.  Jack also enjoy the food that he carried up the mountain.  It was after 11 AM and now there were lots of people on the trail.  When we returned to the last technical section, 5 people were below waiting as I tried to inch down part of the slope.

A young guy was too impatient to wait and I couldn’t get out of his way, so he made a leap of faith, grabbed the rock near where I was sitting with one hand and pulled himself up past me.  I called him spiderman, and he ended up passing us again while he was trail running back down the mountain.  The rest of the route down suddenly seemed much more mellow, although we did at one point loose the main trail as we cut back along the side of the mountain.  I’m not sure where we lost it, but we ended up below the trail and had to cut back up to it through a boulder field that was somewhat difficult to navigate.  So make sure to keep a good lookout for the cairns.   I am not a fan of more technical and exposed hiking… I talk a lot about it in this blog post about Hamperokken.   This hike pushed me out of my comfort zone on a few occasions, but we had a better route on the way down.  I’m really glad that we finally summited Store Blåmann. 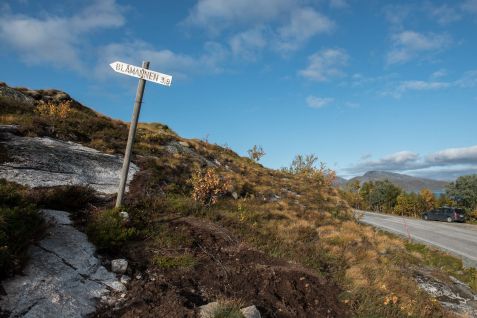 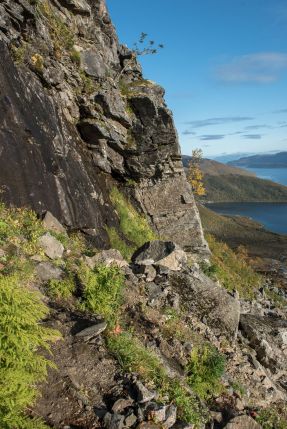 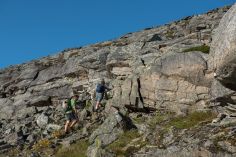 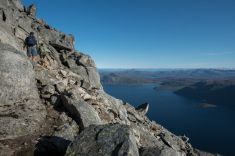 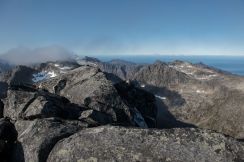 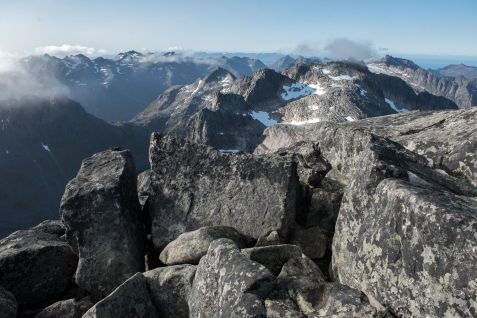 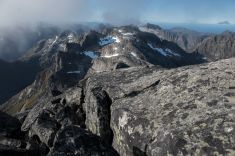 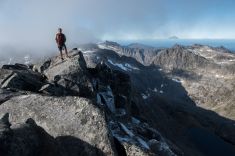 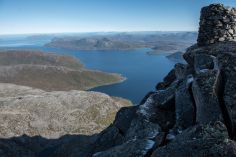 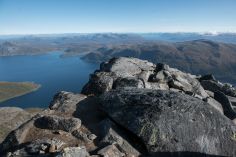 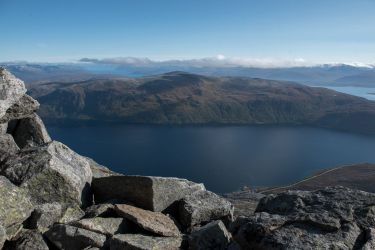 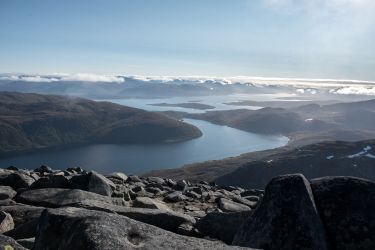